Serving the Lord with Gladness!

Make a joyful noise to the Lord, all the earth! Serve the Lord with gladness! Come into his presence with singing! (Psalm 100:1-2 ESV)

As I read this verse, I recall early August of 1987 when I was diagnosed with an aggressive form of breast cancer. I was emotionally numb awakening from surgery to this startling news.

The following day, after a sleepless night, a stirring turned me to a flicker deep within. I whispered, “Lord, help me. My eyes are upon you.”

I had a deep encounter with the Lord, who came gently with his still small voice. He had to reveal to me what I was feeling. Each emotion was addressed and counsel given. I later realized that He had personally taken me through the first part of Scripture’s 2 Chronicles 20. Therein, Jehoshaphat and the people of Judah are awaiting enemy armies that totally outnumber them. Feeling powerless, they turn to the Lord for help.

I relaxed knowing I could confidently face my overwhelming enemy.

The people of Judah and I experienced victory over a beaten foe.

He reminds me very often that the enemy is beaten. I am not.

Lord, help me continue to make a joyful noise, praising you. Your faithfulness is known, received, cherished, and everlasting. Amen.

(The photo you view here shows images of my guitar and the rockingchair that graced my classroom for nearly 20 years. It is where I’d sit and strum and sing with my students. That school years of 1987-88 we took a lot of singing breaks as they became prayer times for me ‘going out to meet the foe’ with my angel choir right in front!!) 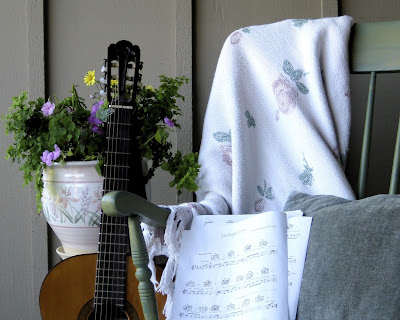