I recently came across a piece of notebook paper that bore my mother’s handwriting.

What she wrote is below in the body of this blog posting.

Another hand written rendering of it is in the introduction pages of the scrapbook she gave to me when I finished high school. That scrapbook holds photos and other memorabilia that span the years from my birth year and up through that graduation time.

What a treasured labor of love it is. It brings joys untold as I revisit those years and all they held - realizing she chose what was important to her, as well.

It is the month when, in our North American hemisphere, the season of spring emerges bringing its promise of new life and hope after long months of winter.

It seems appropriate that the month of spring’s arrival was the time God ordained for my mother, Maggie, to leave her earthly home and enter in to the eternal spring where new Life and color-filled brilliance beyond our imaginings exists - reunited with her Creator.

For my mother, whose life and smile brought joy and a sense of spring to all she met, it was indeed appropriate.

In the hospice facility’s room, where my mother lie during her last days, there was a window. Just outside the window, new life was beginning to bloom. Daffodils, primroses, and a flowering cherry tree framed my feelings that were grief ladened. 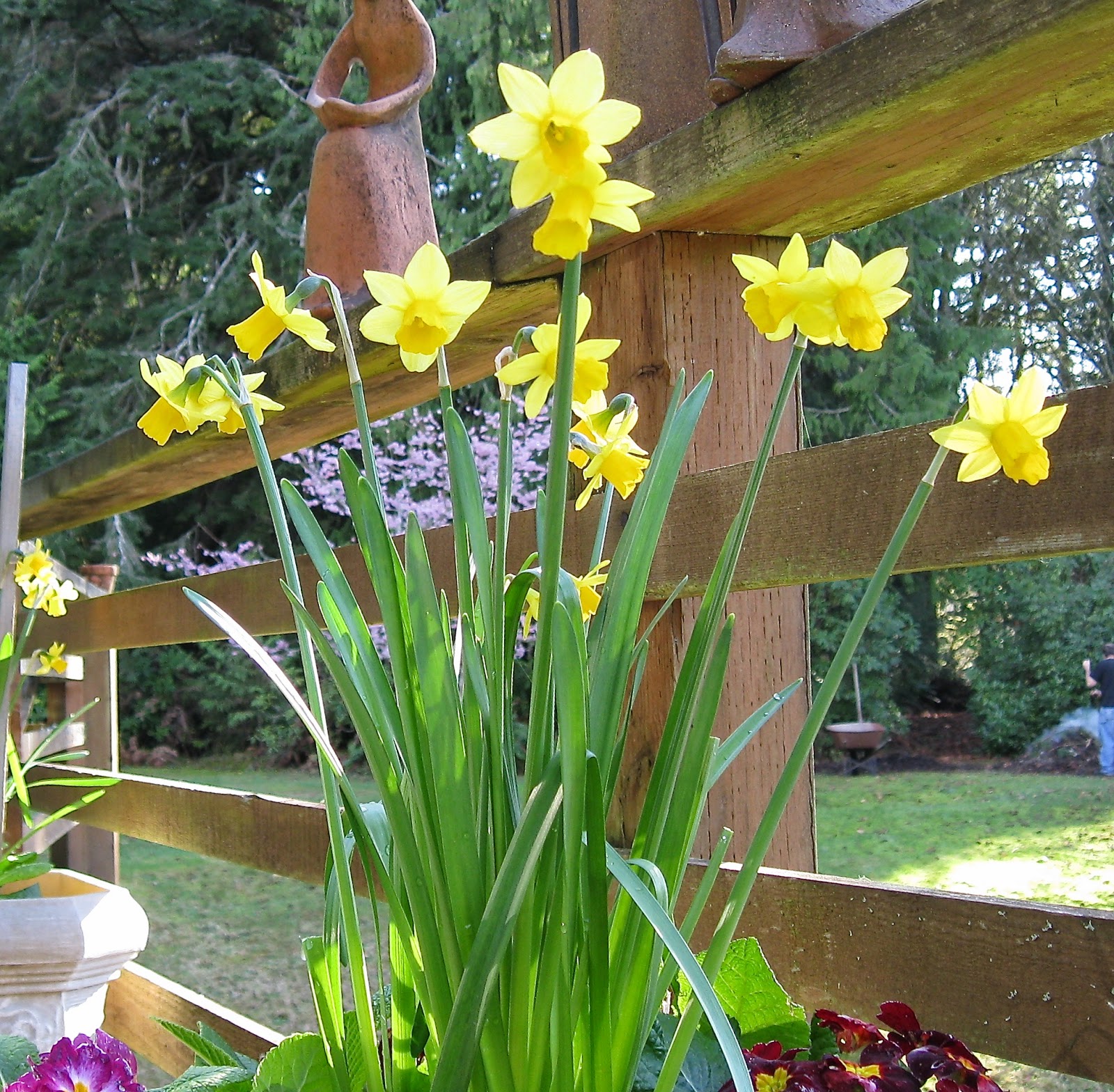 I had moved in to the room for what turned out to be six days. I brought in bouquets to set by her bedside along with other floral gifts friends and family had brought or sent. God was preparing me, and I know that He was preparing my Mom internally, for her time of leaving.

Life is temporary here on earth. But life is not ending, although these kinds of earthly goodbyes are the hardest to say and experience.

God’s gift of life came to me via my parents - a gift for which I am grateful.

In the writing my mother found to use as an introduction to the scrapbook of photos that image some of my early years, she found sweet expressions of her hopes and dreams that she wished for me.

They are ever appropriate thoughts to express for a life newly begun and, equally, for a live fully lived.

The author of these words is unknown to me, but all that they express were known by my mother and continue to be experienced by me.

During this spring’s month of March, I share them with you as I remember my Mom, her life, the lives that she touched, and the God-given life that we each have been given as a gift.

Here are those words. 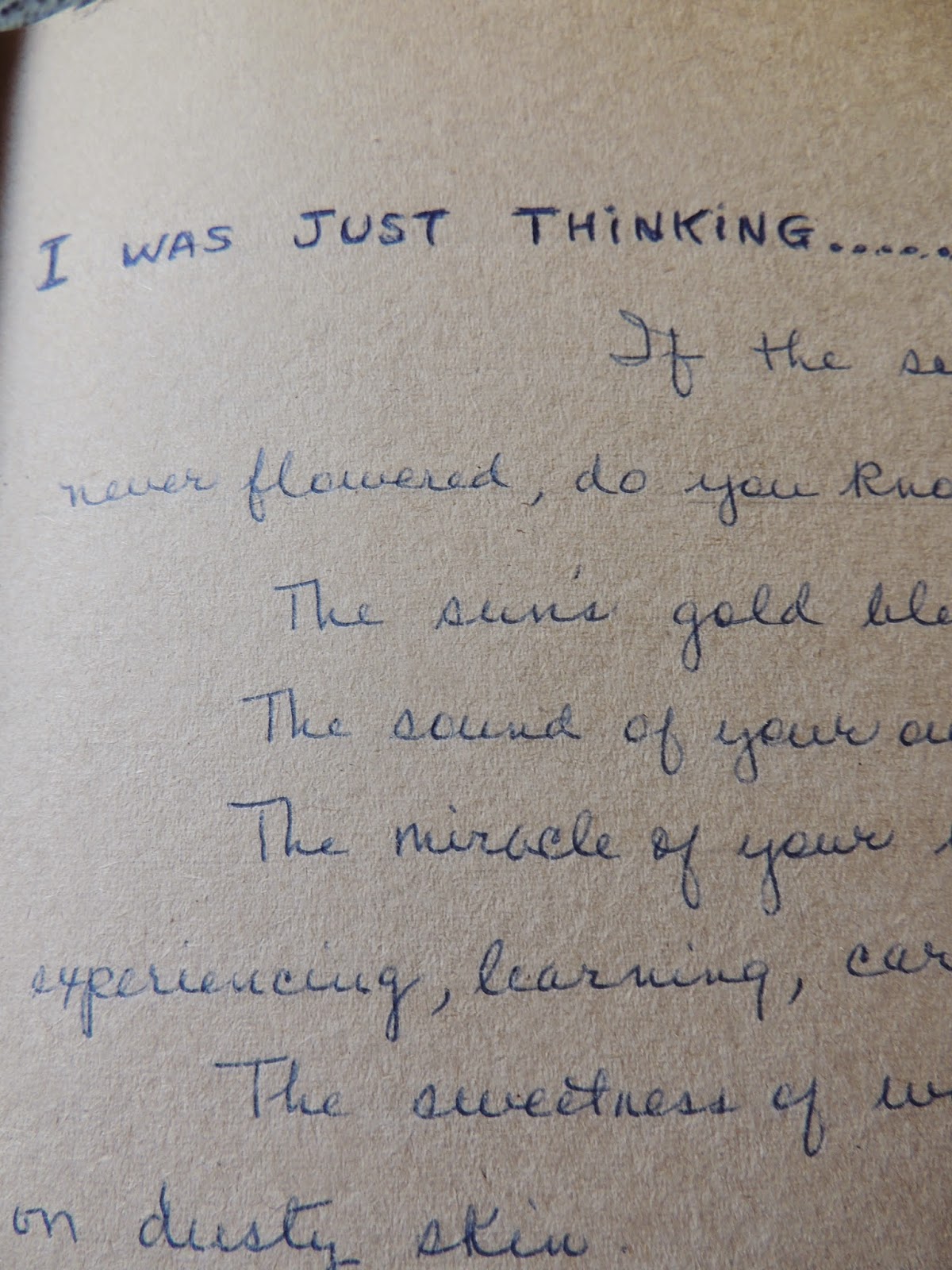 If the seed that was to become you had never flowered, do you know what you would have missed?

The sun’s gold blessing on your head,

The sound of your own voice, your own laughter,
your own tears.

The miracle of your own body, a beautiful instrument, designed for experiencing, learning, caring, achieving.

The sweetness of water on thirsty lips and
the silk of it on dusty skin.

The taste of bread, fruit, meat, and
all the mingled caress of their fragrance.

Long grass under your toes, a bird in flight against a cloud, the soaring ache of the universe beyond the stars.

The release of rain and the awesome anger of thunder.

The satisfaction of seeking and finding the peace of fulfillment.

A certain ecstasy at unspecified times and for unspecified reasons, yet somehow, a justification for living.

A quick recognition of love in the lines of a face, the touch of hands, in words left unsaid, in an act of kindness for no other reason.

The creation of a child, or a place, or a piece of something beyond self, giving your heart the right to beat for more than it’s own need.

The lights of man’s night and the night of God’s lights and you between, a partner of both.

The privilege of being allowed these years out of eternity to share the greatest adventure you can ever know . .

Below is a collection of photos that may stream the focus of these lines from Mom's inscription in my scrapbook: 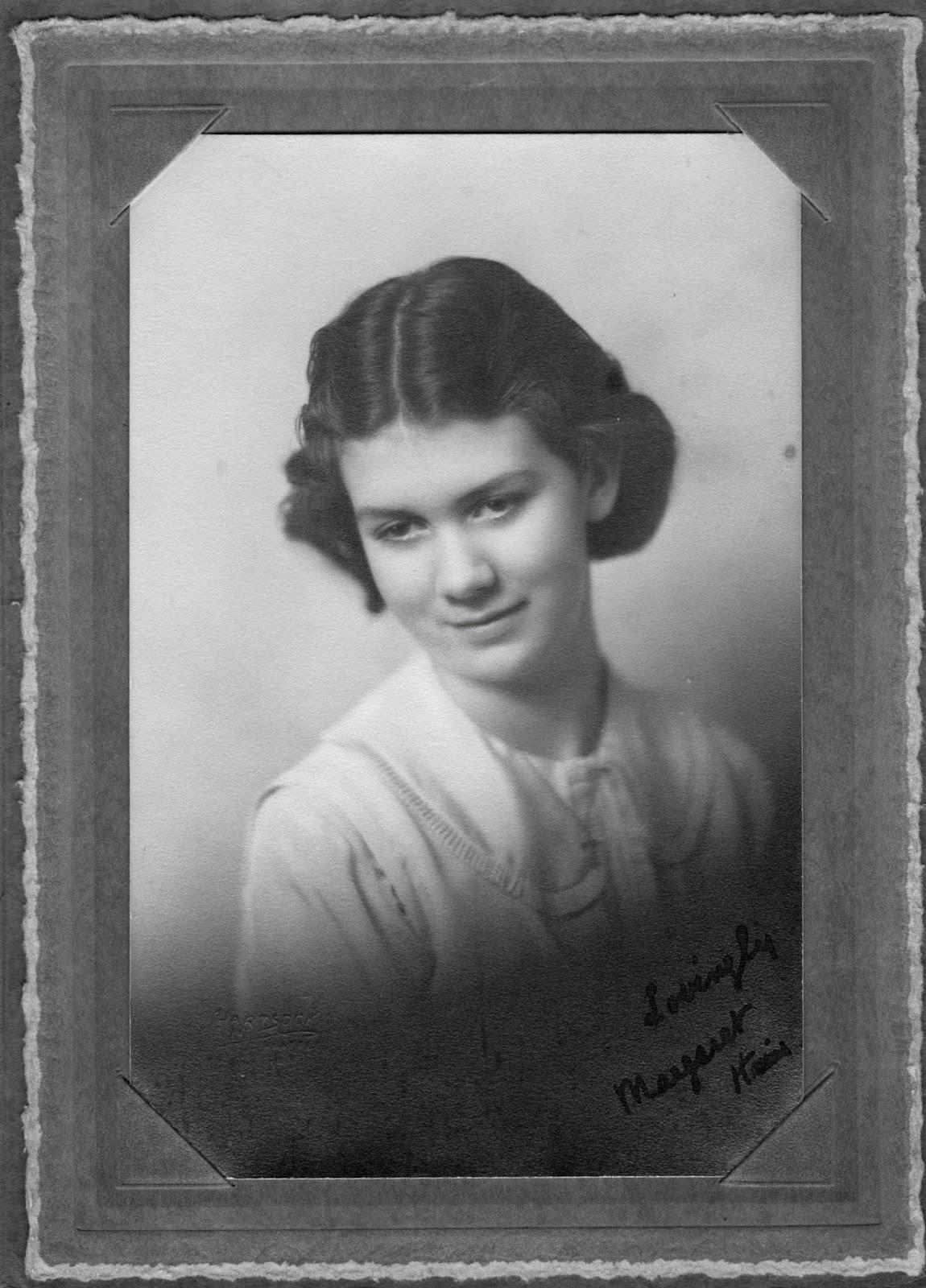 1934, age 12 Forest Ridge School . Mom was able to skip
two grade levels which had her graduating earlier than most of her age. 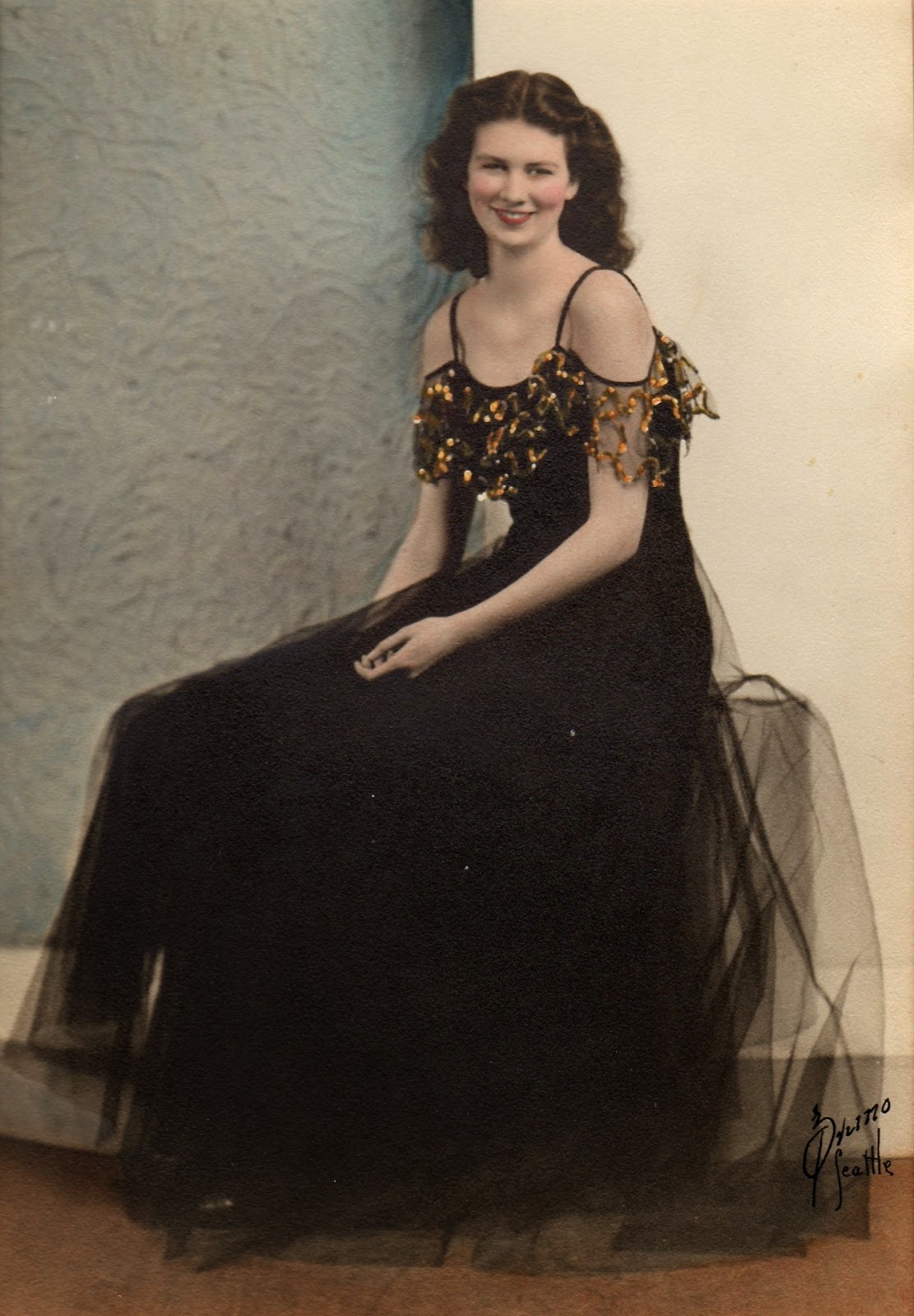 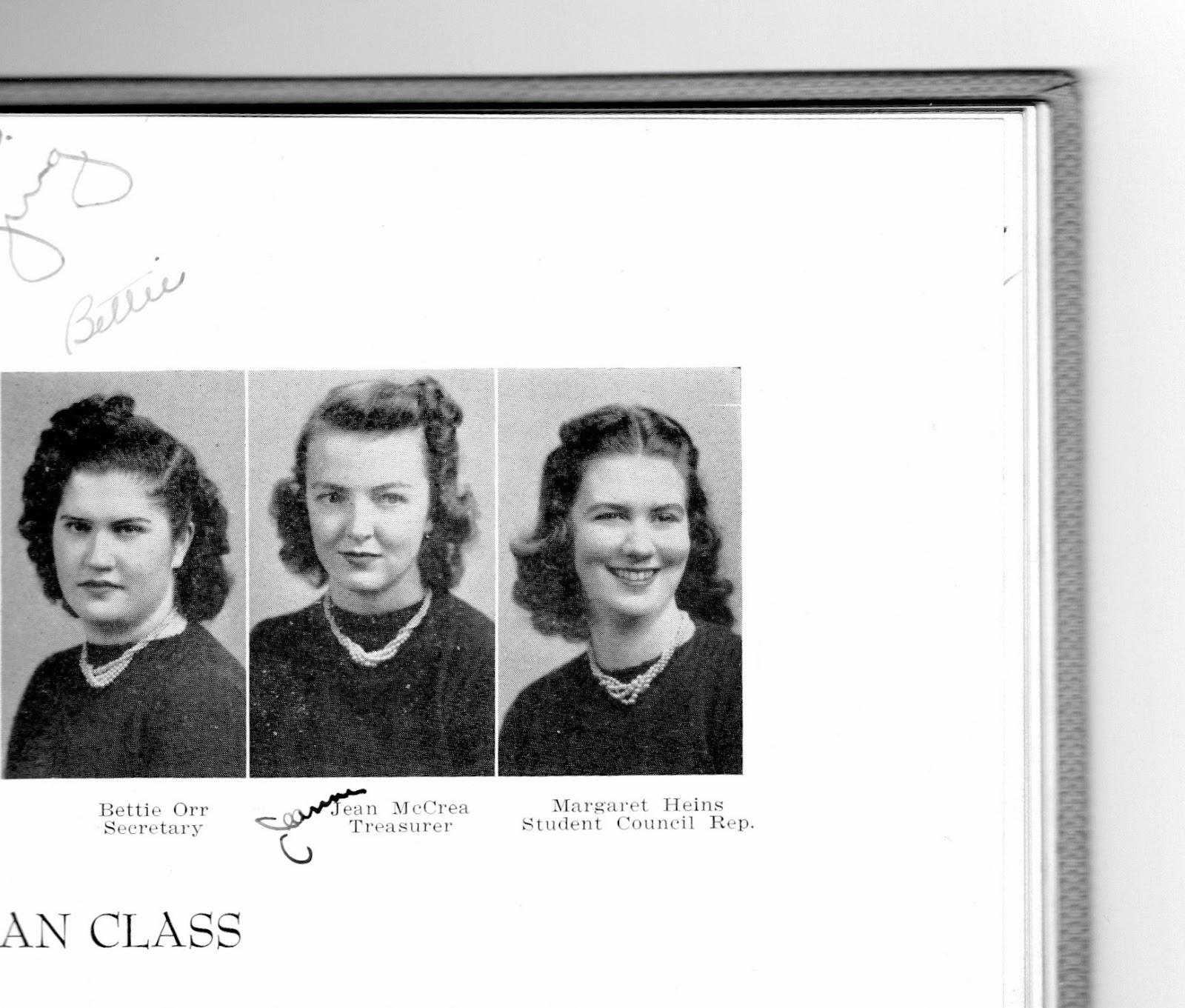 1940 - Freshman year at Marylhurst College in Oregon where she was a Student Council Rep. 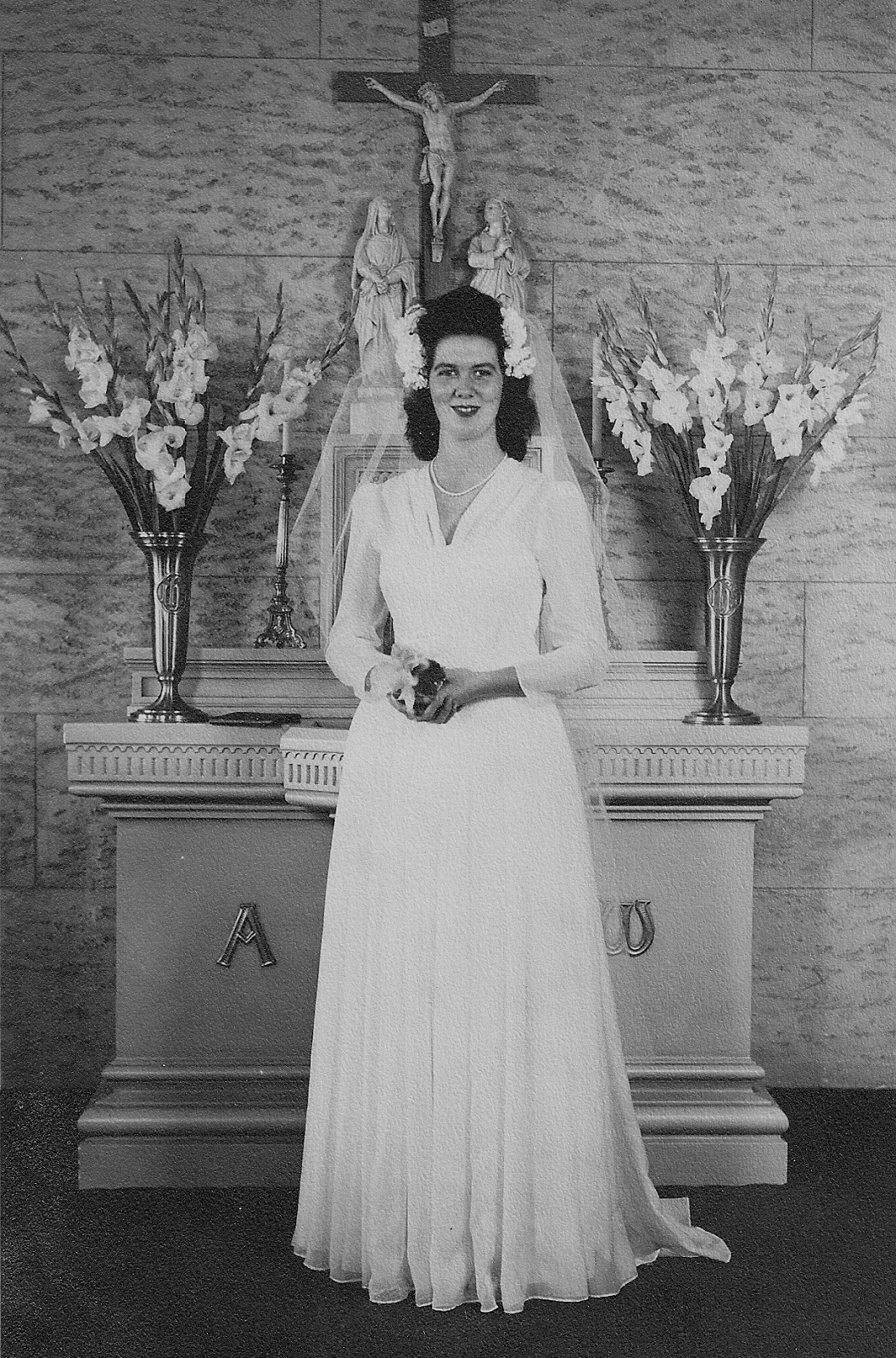 After winning the heart of Lt. David E. Severance, their wedding day was September 13, 1942 in San Diego, CA.
Thus began her 26 years as the wife of a career Marine, although he shipped out 3 months after their wedding for deployment in World War II and the family's moving around years were yet to come. 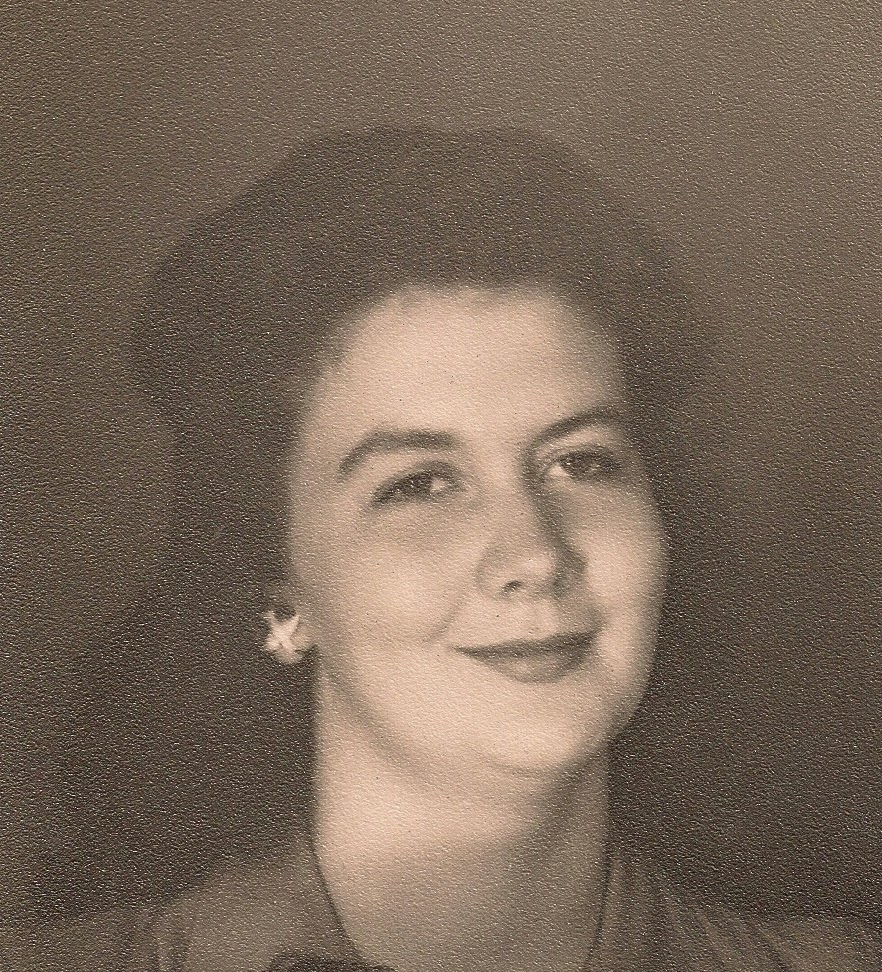 I am skipping the photo years of our family's travels but you can well believe those were wonderful times.

1965 - modeling at the Officers' Wives Fashion show when Col. D.E. Severance was Commander of Floyd Bennett Naval Air Station in NY. This was the year I graduated from the University of Washington in Seattle, Washington! 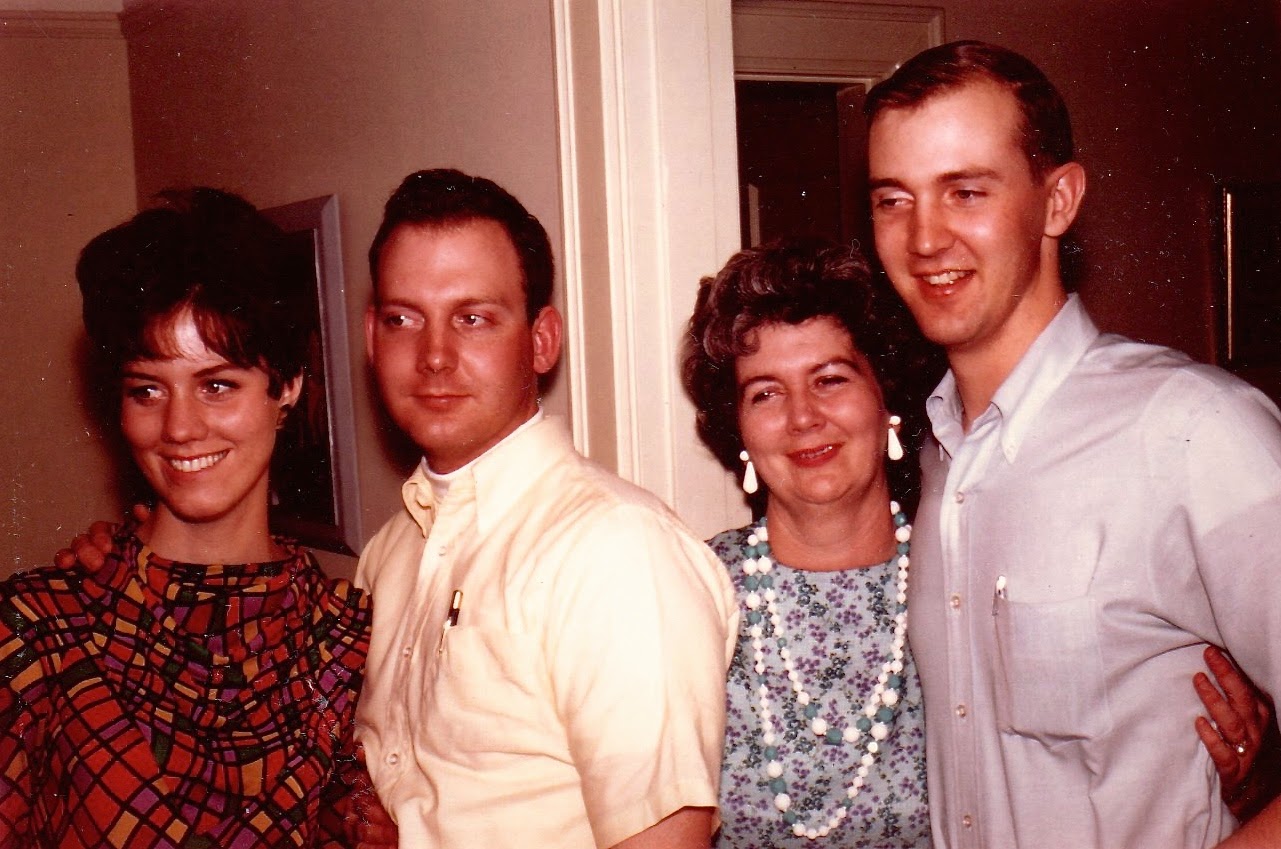 August, 1968 - family reunion in Seattle, WA - a tradition for many August months up until my grandmother's death in 1983. In 1968, I was working with the VISTA program in Washington, D.C. and was able to fly home for this reunion.
Lynn, David, Mom, and Michael 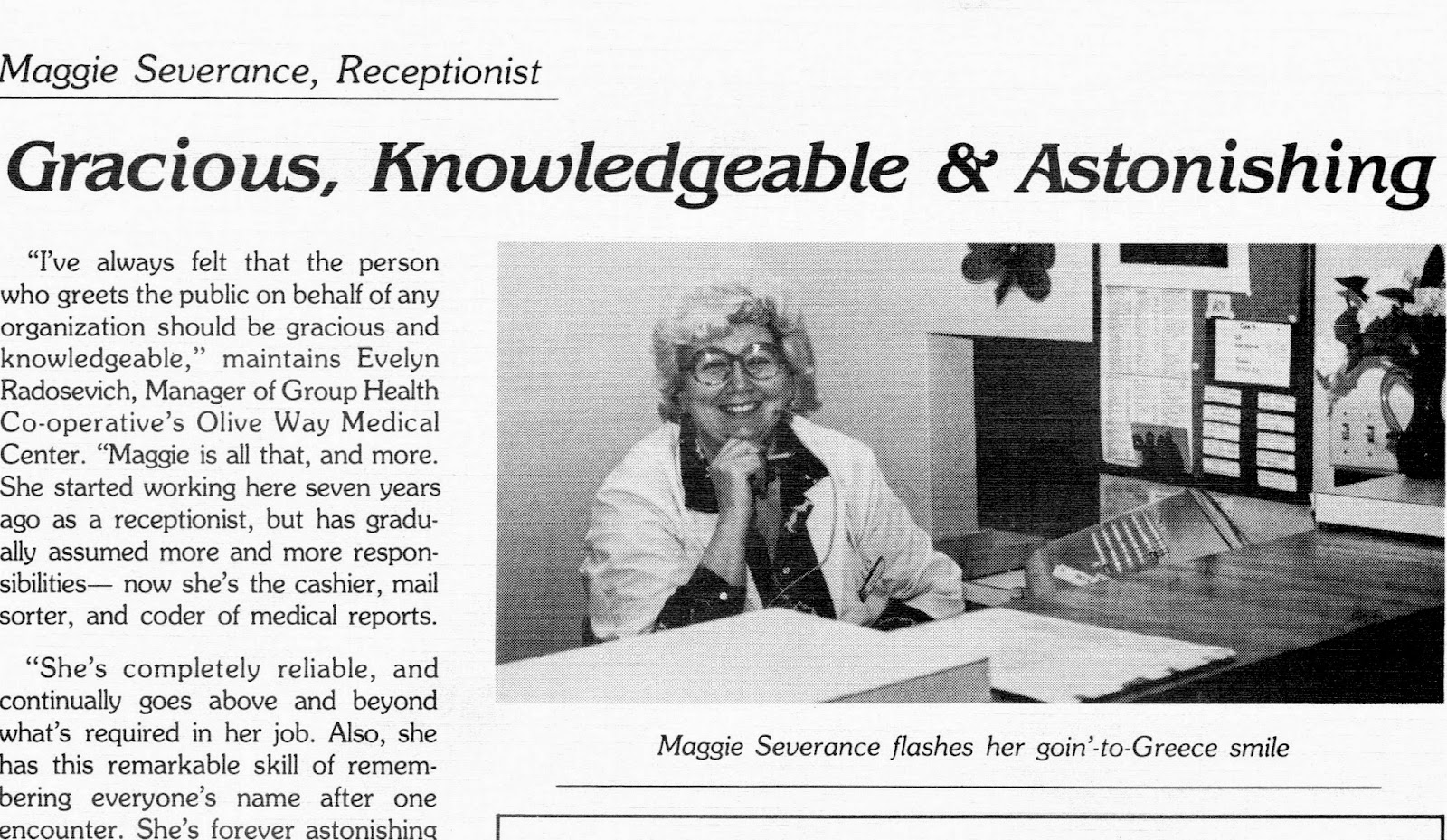 After working for a dentist from 1968 - 1973, Mom was hired on as the head receptionist at a medical clinic in Seattle. This is a  newsletter article published in 1980, the year my brothers and I were able to pool our resources and send her on her dream trip to Greece. We had long time military friends who were stationed there and once she arrived, they made those 3 weeks so very memorable for her. 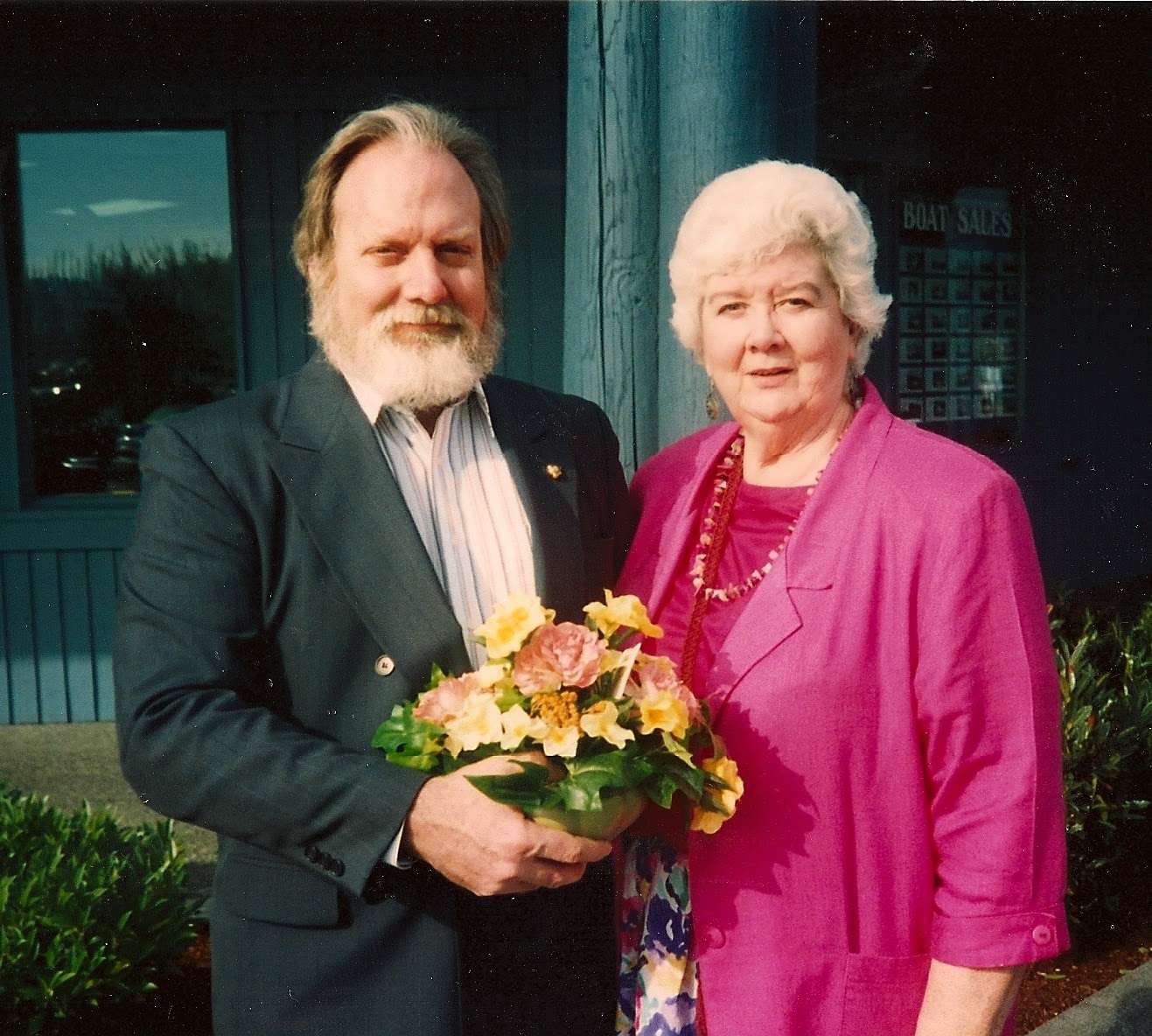 With David, circa the late 80s, after a Mother's Day brunch 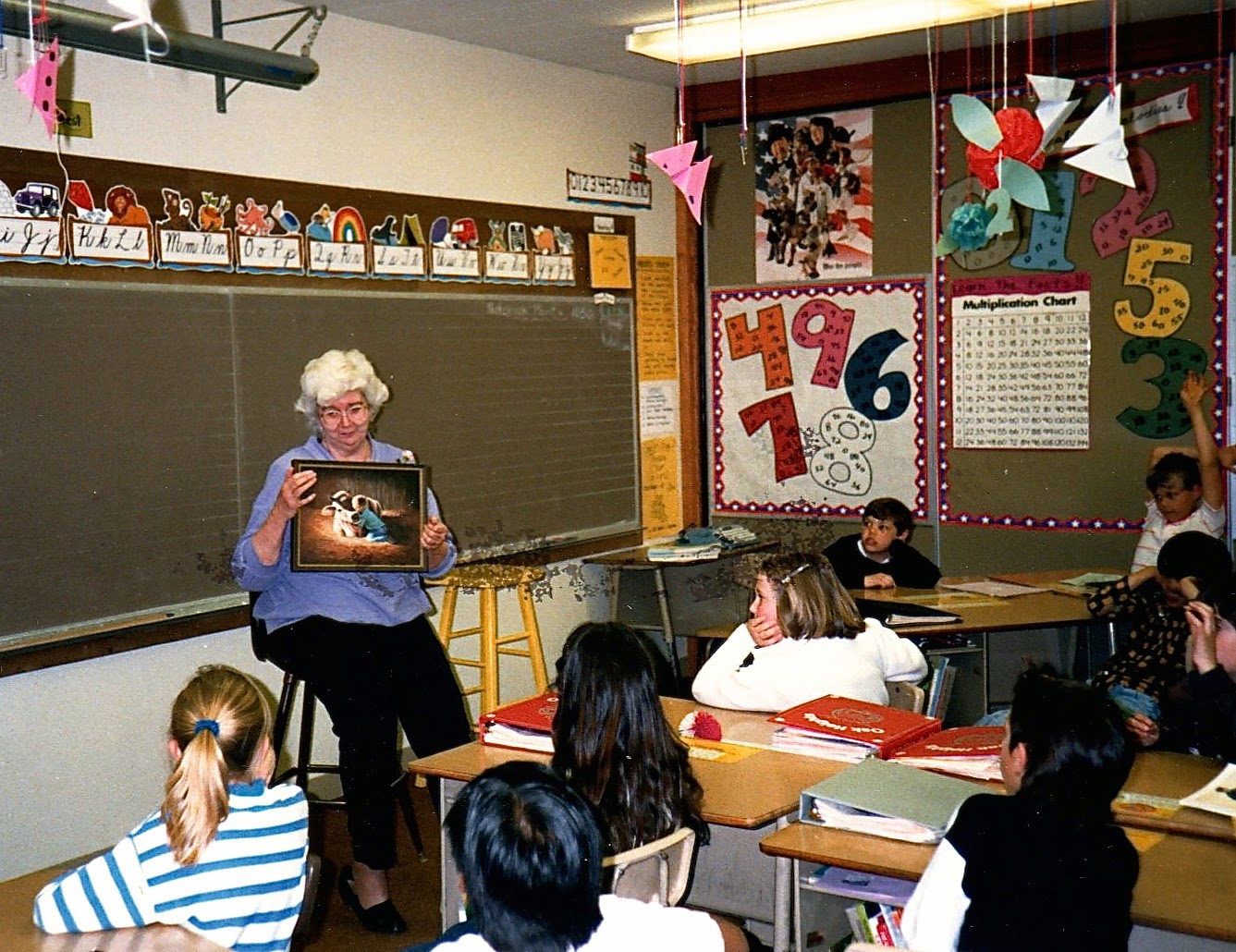 Mom was a talented and accomplished artist, mainly oil painting medium. After her retirement in 1985, she devoted many hours to this endeavor. Luckily for me, she willingly came to my classroom one day a year of those ensuing years up until my retirement in 1992, to paint for my students -  beginning with a blank canvas and showing them the steps to completion. This was a photo taken in 1988 with her sharing one of her finished works. 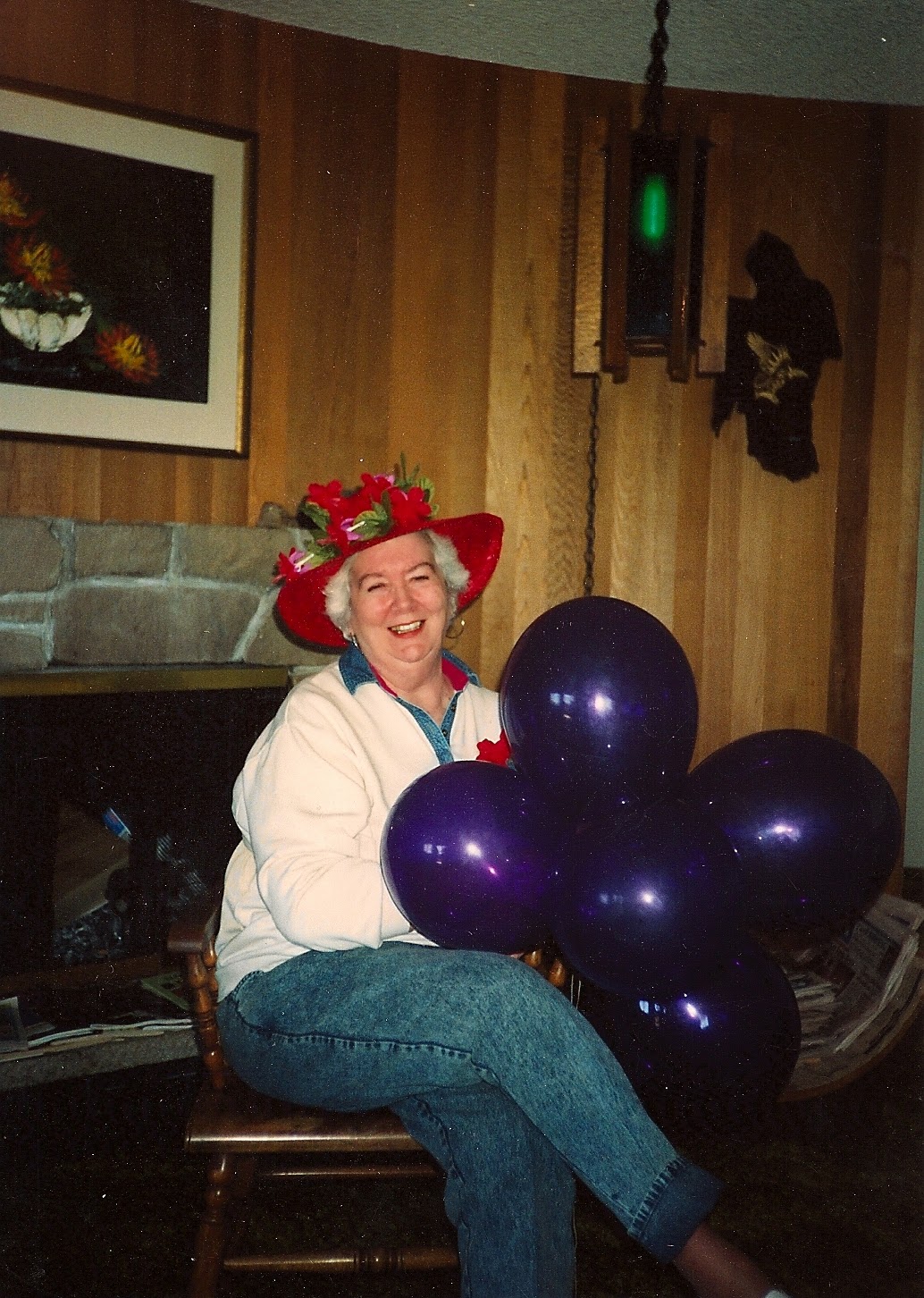 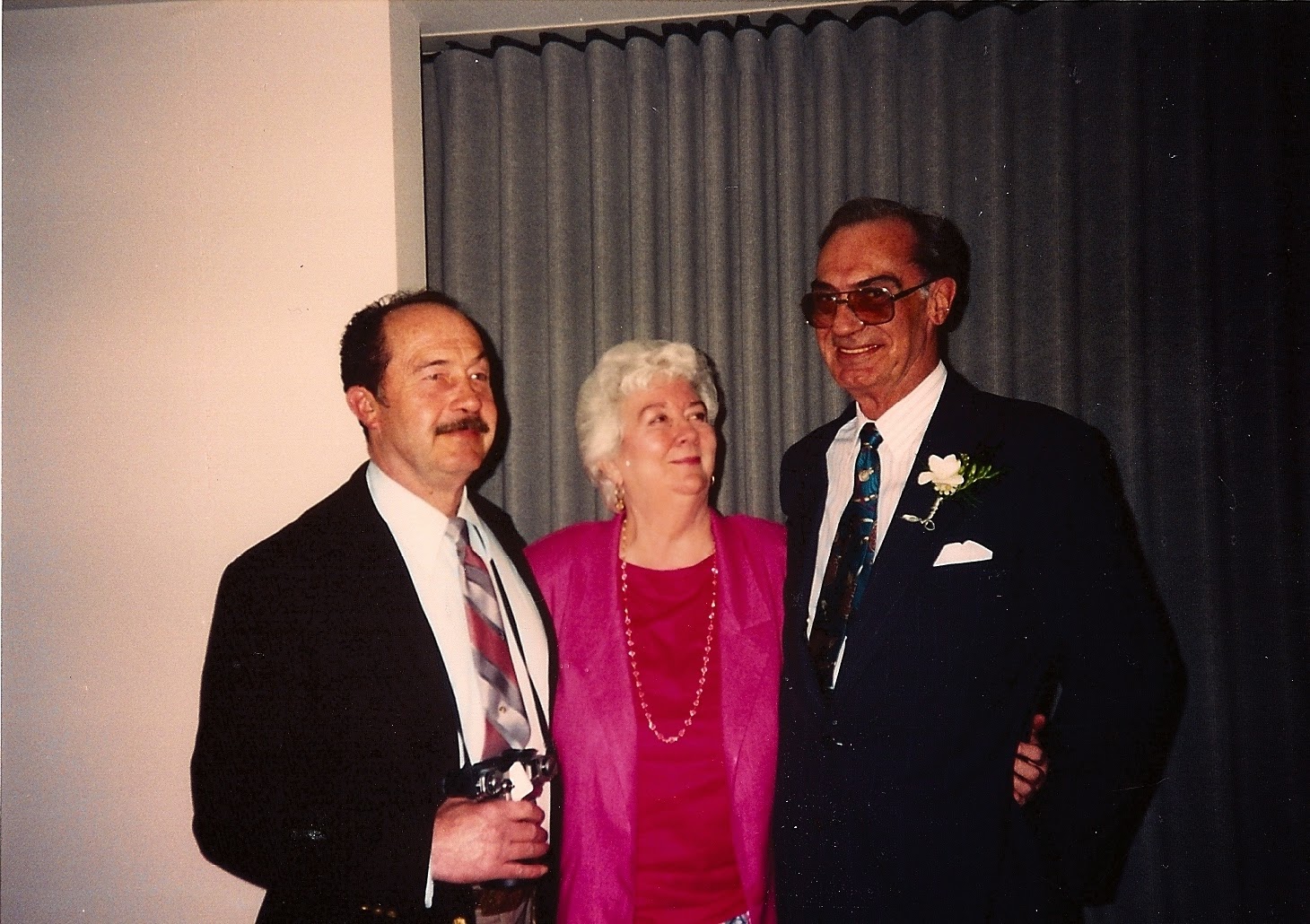 1992 at a niece's wedding with her brothers, Vic and Berle 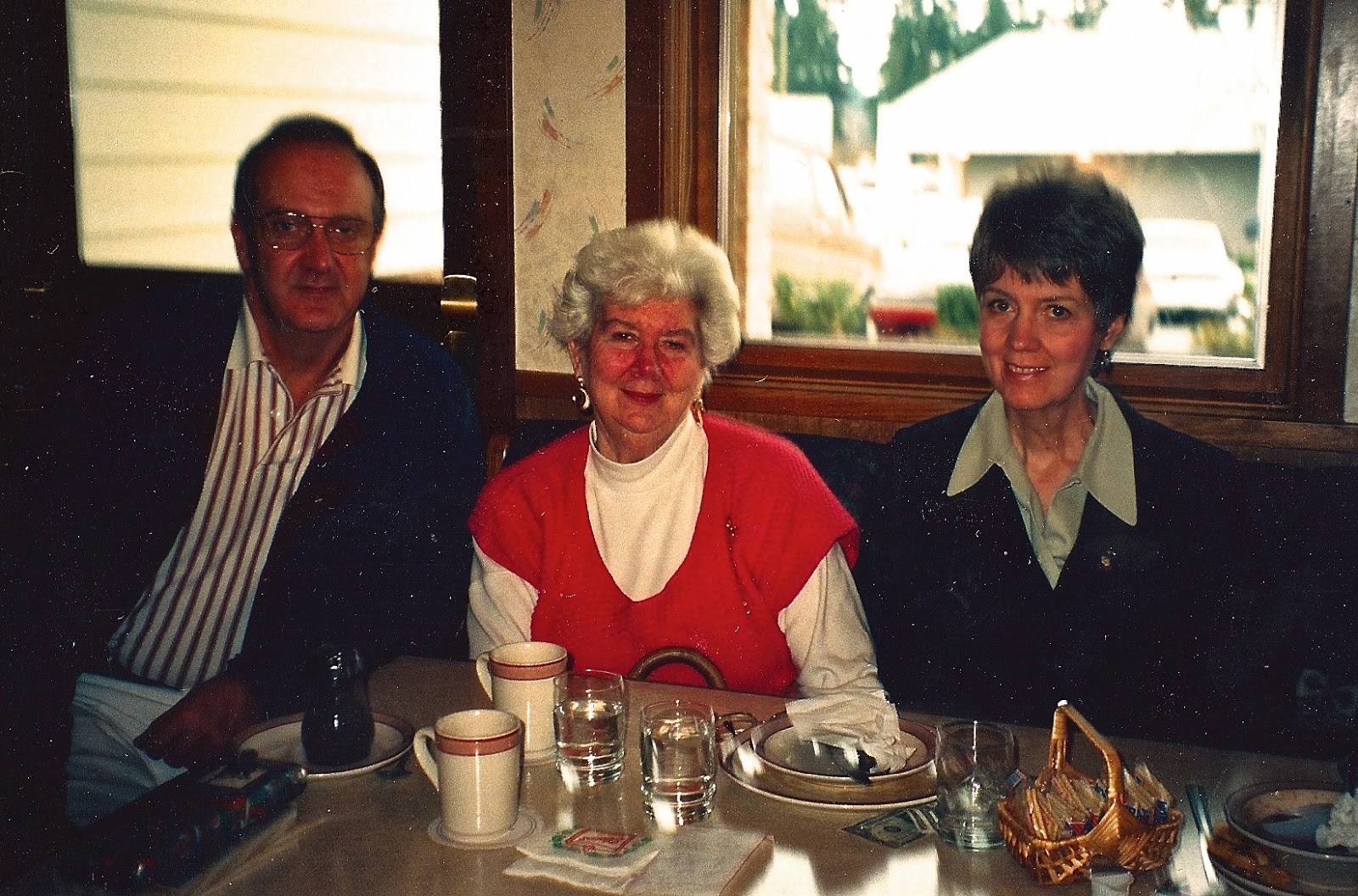 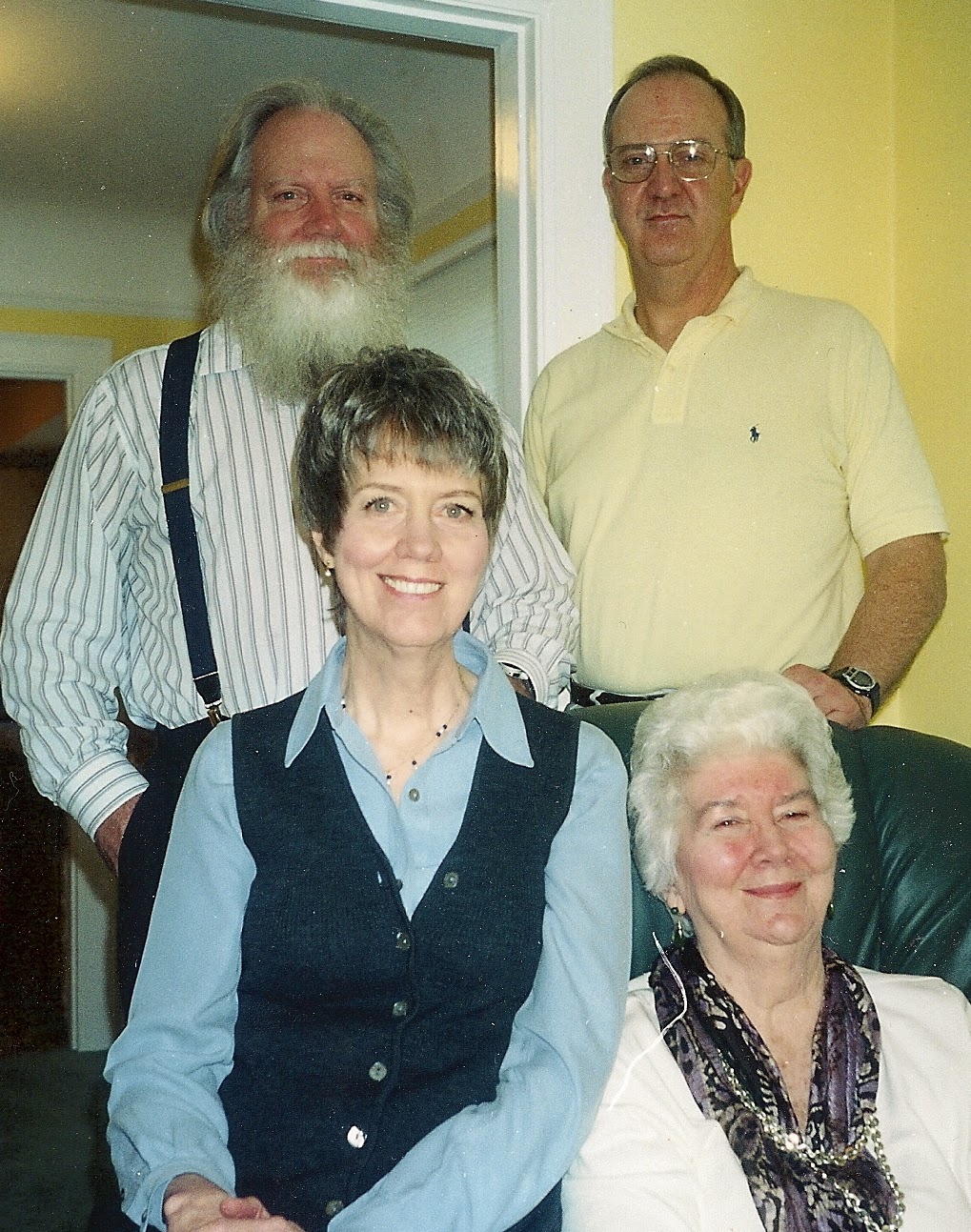 Michael bought the family home from Mom and hosted a December dinner there in 1999 - great evening for all. 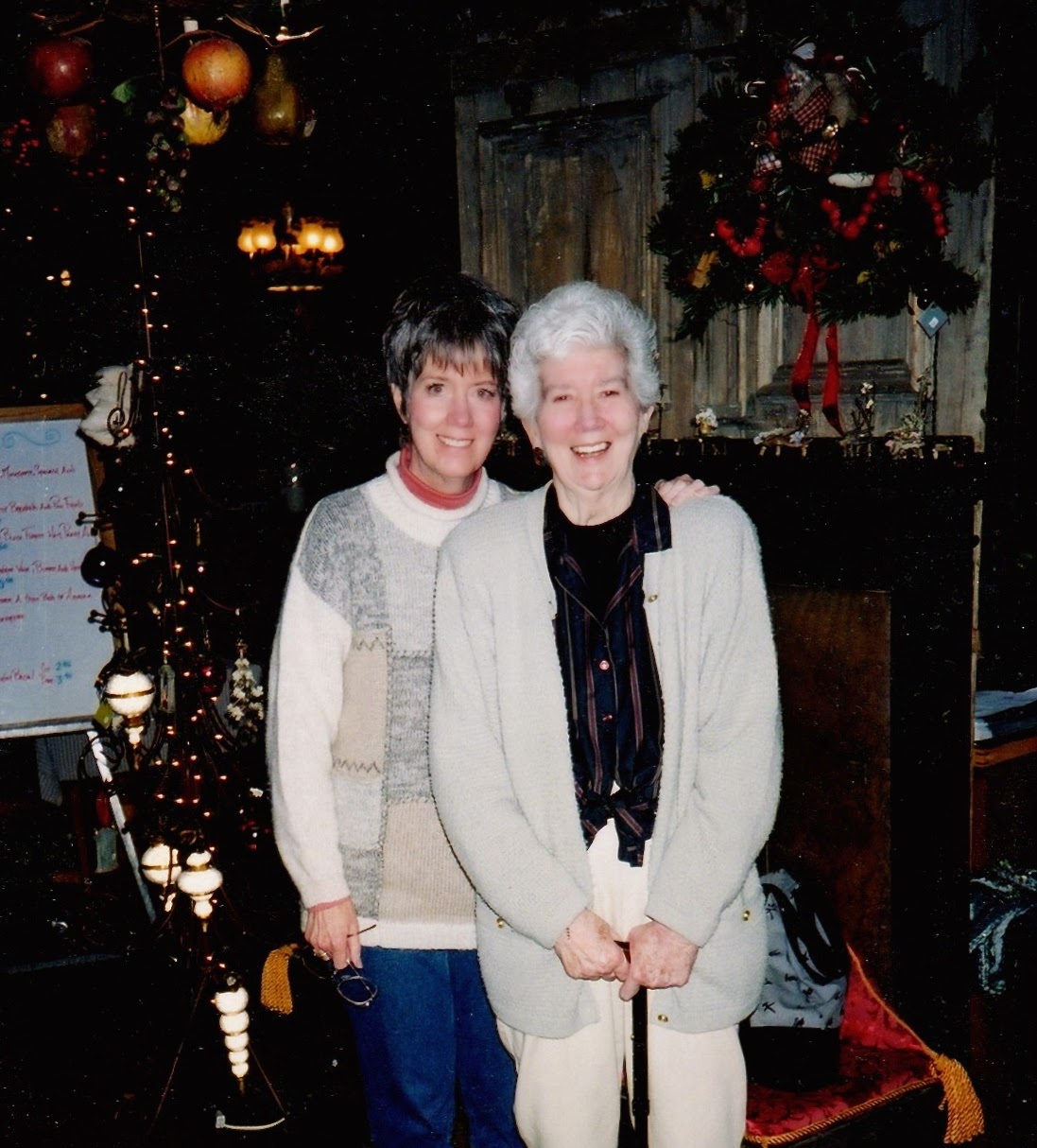 December, 2000 - a special outing with Mom and what came to be the last photo of us together. What a wonderful day we had in a favored place. It is a moment snapped in time as we were leaving - how grateful I am to have it.

Treasure each moment with a loved one.
Each moment is a treasure.